Glyphosate-resistant Canada fleabane was first confirmed in Ontario in 2010 in two counties. Since then, it has spread like wildfire throughout Southern Ontario. As I drive through the countryside, it’s hard not to notice the abundance of maturing Canada fleabane plants visible in soybean fields.  This problem weed is no longer limited to certain counties or areas as it was in the past.  Many farmers have never seen such an abundance of fleabane plants in their fields before as they have this year, and some have noticed where the tree lines have restricted the movement of the fleabane seed into their fields by wind, creating a distinct line in the fields of thriving fleabane plants vs no fleabane plants at all (see photo). 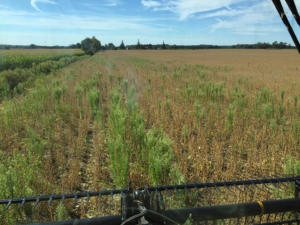 A mature fleabane plant can produce up to 250,000 seeds/plant. The seeds are small and airborne, and can also stick to equipment, animals, etc, making the seeds easily transferable across the countryside.  There have been reported soybeans fields with populations of Canada fleabane plants upwards of 1 million plants/acre resulting in 100% yield losses in parts of fields.

Canada fleabane is a winter annual, meaning it can produce rosettes in the fall and survive the winter, and continue producing new seedlings in the spring. Tillage, coupled with a herbicide program combining multiple modes of action, should be utilized in order to achieve best results. Burying fleabane seeds to a minimum depth of 2 inches can reduce seedling survival significantly. To bury seed you need to mould board plough, since conservation tillage tools do not bury seeds as well. To control glyphosate resistant fleabane begin by controlling emerged seedlings in the fall with either tillage or an effective herbicide such as dicamba post-harvest. Spring tillage is effective on small seedlings, but must be aggressive if trying to control plants with large root systems. Most fleabane biotypes in Ontario are glyphosate (group 9) resistant, but there are also resistant fleabane biotypes to group 2, 2&9 and 22 herbicides. In non dicamba resistant soybeans, fleabane is best controlled pre-emerge as options are extremely limited in-crop. This could include clean tillage and/or a burndown including saflufenacil + metribuzin. For dicamba resistant soybeans using low volative dicamba products pre emerge is a good control strategy. In Ontario the preferred method of dicamba application is pre emerge.

It is critical that you have a long term weed management strategy in place across all crops to stay on top of fleabane. This includes multiple modes of effective action along with a diverse rotation, tillage and cover crops to achieve best management of fleabane.